Libraries are back to regular hours and activities from Tuesday 22 September. Read more.

Celebration of the Nelson Pottery Industry

A celebration of the region's pottery and clay industries was the major event planned by the Libraries for the 2020 Heritage Festival. This was planned with Steve Austin from the Marlborough Museum, the Suter Art Gallery, the Nelson Provincial Museum and input from local potters and industry experts. This page provides a taster of the event and resources for you to discover more.

Red Wall: A timeline of the Nelson Pottery Industry - read the timeline, the pottery story and list of resources on the Prow:

Glass Cabinet - The work of Nelson Potters : a display from local collectors. 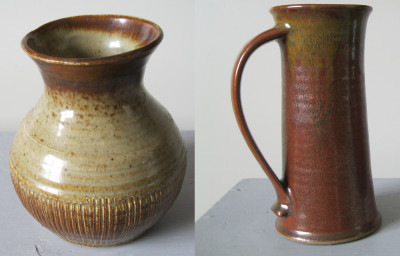 To sample the work of other artists to have featured in the cabinets,  have a look at some of the works in the collection of the Suter Art Gallery (images available on NZ Museums):

Kokowai - obtained from clays rich in iron and aluminium silicates - was highly prized by Māori; depending on chemical composition, reds, oranges, yellows and browns were produced. Onekaka and Parapara in Golden Bay were important resource areas. The clays were dried and ground, then mixed with oil for personal adornment and to decorate (and preserve) waka, buildings and tombs. The former died out soon after European settlement, perhaps because of Pakeha attitudes.

Robin Slow was to present on kokowai. Robin uses kokowai in his paintings, as well as soot, ground stone, gold leaf and harakeke. He is a  Golden Bay artist who has worked with the whanau at Onetahua Marae producing murals, traditional instruments, kowhaiwhai and carving, and the completion of the wharenui, Te Ao Marama. For more, see a profile and work at the Little River Gallery and view Bob this stunning soundtrack and video accompanying an exhibition of Robin Slow and Brian Flintoff's work which was presented at the Little River Gallery in 2019 to mark Matariki.

Clay was found widely in the Nelson region. By 1842 the clay industry was already established in Nelson: four brickfields and a number of brickmakers were operating in  the Moutere Hills, Redwood Valley, Brightwater and Spring Grove. Significant clay deposits were later found at Puramahoi, supplying the Onekaka pipeworks and near Tapawera - the significant Kaka clay mine. Presenting on these themes:

Aspects of the Nelson Pottery industry

An exploration of some of the key figures of the industry and artists working today, with: